The last Monday before May 25th is always a holiday in Canada for Victoria Day.  Victoria Day celebrates the birthday of Queen Victoria who was Queen of the British Empire (including Canada) in the 19th century, and the holiday dates from this time.  Everything is closed on this day and most Canadians spend the day in activities with families and friends.  It is the unofficial start to the summer, and many Canadians go camping or open their cottages. Many people drink a “24” (24-pack of beer!) on this weekend, particularly when the weather is disappointing (as it was this year!).  In Ottawa, the nation’s capital, a huge tulip festival is held, featuring millions of brightly-coloured tulips sent as a perpetual gift from the people of the Netherlands (whose royal family fled to Canada during World War II).

After sunset on Victoria Day, the sky comes alive with brilliant fireworks displays across the country, particularly in the major cities but also in Victoria, BC, the city named after the great 19th century monarch.

At English Encounters, students and staff marked the celebration with a potluck lunch on the Friday before the Victoria Day long weekend.  Everyone brought a dish of food from their own culture and the result was a wonderful buffet of many different and delicious foods!  Happy Victoria Day! 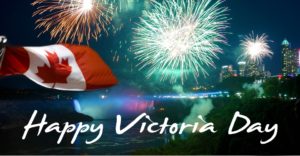